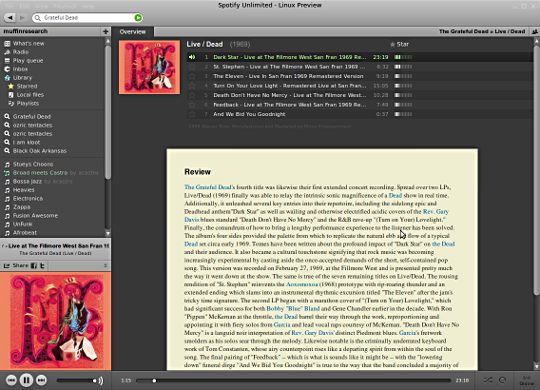 New version: I've updated the script to use D-bus with spotify for Linux version 0.4.8 see Spotify Screensaver Toggle with D-bus for further information.

In a previous post, Lock Screen and Pause Spotify I provided a rudimentary script to pause spotify when your screensaver kicks in. Now with the Spotify Linux preview being available I've started using (and paying for) a Spotify unlimited subscription. I decided I wanted to update the script to be able to pause Spotify when the screen is locked and also start playing after I log-in.

When spotify has an api, it will then make sense to use that instead, which should mean that this script can then be completely run by listening to dbus events which would be much more elegant.

The deps are the same as before - here's the incantation to install them for Ubuntu.

To set it up, link the script to somewhere in your path and then create a keystroke in "System -> Preferences -> Keyboard Shortcuts" to lock the screen. Once that's done, you should see the screen lock when that keystroke is executed and Spotify will be paused if it was playing. 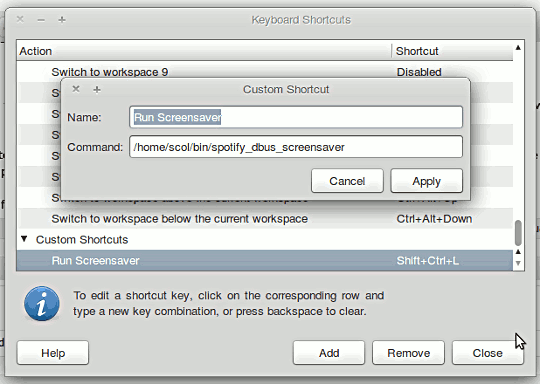 You can grab the code from here. Feel free to send me improvements or suggestions on how to make it better.

Known issue: I've noticed a bug in that it doesn't pause if the window is hidden. This is tricky as it's not visible to the window list. Suggestions how to workaround this are welcomed.

Taking Screenshots of your Android Phone