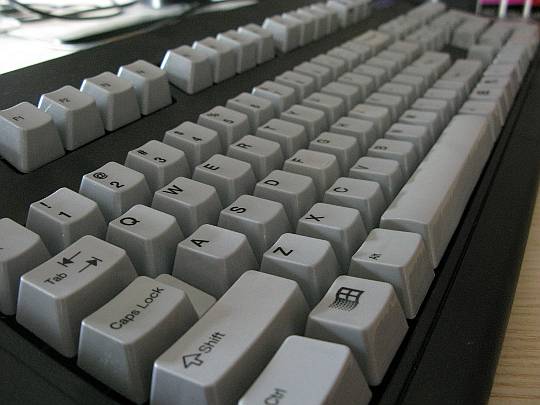 If you're someone who uses a computer for a living then having a decent keyboard is a very worthwhile investment. Earlier on this year I bought myself a couple of US layout "customizer" keyboards from Unicomp (one for work and one for home).

Unicomp was founded in 1996 when they bought the rights to the "buckling spring" technology as used in the well-known IBM Model-M keyboards. The Customizer models are essentially modern manufactured Model M keyboards albeit with slightly different numbers of keys and of course a USB cable.

Having had these keyboards for several months now I'm really happy with them. They are just beautiful to type on. The only downside of getting feedback from every key-press is the loud click that accompanies every key-stroke. My colleagues are pretty much used to me clacking away each day but I probably only get away with it because there's a large amount of background noise in the office. Ultimately though because you can feel when you've made contact with a key it should mean you end up typing a little lighter than you would with an inferior rubber domed keyboard.

That said for me I would find it hard to go back to a normal keyboard. Having recently had to use a machine with a rubber domed keyboard I found the lack of feedback made the keyboard seem lifeless.

The build quality is great - these keyboards are built like the proverbial brick outhouse. So if you're in the market for a decent keyboard I would recommend taking a look at Unicomp keyboards, they're not particularly expensive at around $69 and they certainly feel like they should last a lifetime.