Well I'm off to see revenge of the Sith at half past midnight tonight. I'll be drinking plenty of coffee before I get there - and from what I've heard it's action packed so I can leave the matchsticks at home. 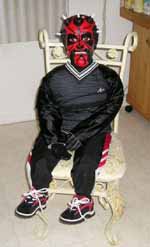 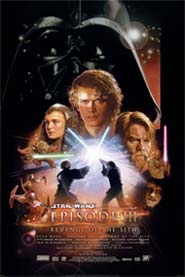 I enjoyed R.o.t.S and I didn't fall asleep nor was I arrested! There was certainly a lot of ground needing to be covered to bridge the gap between Attack of the Clones and Episode IV but I think they did it well.

Since seeing it I've wanted to go back a re-visit Episode IV in fact I can imagine the box sets of the original trilogy will be flying out the door now that R.o.t.S is on general release.

One thing I noticed was the appearance of Jar-Jar - he doesn't utter a word. The lesson was learnt from Episode I.

If you haven't seen it yet, I reckon you should do yourself a favour and go check it out.

As a bonus for any real Star Wars geeks out there here is a link to an in-depth article on the injuries of Darth Vader. Warning: May contain spoilers to Revenge of the Sith. Yeah like you don't already know the story!