I though it about time I put together a write-up of the First DjangoCon held at the GooglePlex in Mountain View, I enjoyed it immensely and look forward to Euro DjangoCon.

Whilst we were out there our trip co-incided with a YUI 3 event so we thought it would be rude not to head along to that.

Before DjangoCon started, Cyril and I got the plane to San Francisco and went over to Yahoo's Brickhouse to met up with old friend and ex-colleague Ben Ward and to see the YUI 3.0 presentation in the evening. After a swift bit of awesome tex-mex Cyril and I went for a quick mooch around town before getting back in time to see Nate Koechley, Adam Moore and Matt Sweeney talk about YUI 3.0.

All in all I was really quite impressed with how YUI 3.0 is shaping up. As an ex-yahoo who is now using JQuery I feel it's looking to have addressed some the things that other people have always criticised. Having used YUI 2 at Yahoo I never found the verbose namespacing that much of an issue but having now using JQuery I can kind of see what people were talking about. This is very much a thing of the past with YUI 3. Also something that I've struggled with using JQuery is that it's such an abstraction. I tend to use JQuery for the stuff it does really well like selectors and events (JQuery's event implementation is very simple and clear) but use standard JavaScript for most other things. YUI 3.0 sticks to making it's interface follow existing JavaScript interfaces much more closely, whilst adding necessary features such as CSS selectors. Although I've yet to play with it I'm looking forward to trying it out, as I'm pretty sure I'm going to like it.

Afterwards Cyril, Tristan and Ben and I headed out for the second mexican of the day; it was like a marketplace team re-union sans fondue! (We made up for that later!).

On the Friday (Evil)Rob, Cyril and I headed over to the GooglePlex , where we were taken on a tour of the facilities and met with the Open Source team. My take on the Googleplex is that it's awesome but at the same time scary, because it's clear that the intention is to provide everything so Google becomes the hub of every day. Still with facilities like that you're going to want to work long hours!

After helping out on the registration desk we caught Guido's talk about AppEngine and it sounds like in the future it's going to be possible to get Django's ORM talking to BigTable directly which would be fantastic. It was also interesting to see Guido's code review app which I got some pictures of someone has ported this to standard Django app and I hope they post details at some point.

Adrian Holovaty's presentation on the history of Django was really interesting. It really proved the idea of putting something together and then iterating on it.

Christian Hammond and David Trowbridge talked about ReviewBoard and their utility apps Djblets. Really liked the look of the Djblet called siteconfig. It's basically a way to create an interface for Django settings. Review Board itself is something I've been meaning to play with, Cyril asked the question I'd wanted to ask which was, is there support for bazaar and apparently there is. Excellent!

Malcolm Treddinnick's talk about the Django ORM was really impressive, mainly it made it really clear how much effort has gone into the queryset refactoring. Also it came across that the ORM is much more flexible when it comes to creating custom query methods something which was borne out by the next presentation.

Justin Bronn talked about his project GeoDjango. GeoDjango takes your breath away as it's got support for a huge range of geo formats and standards and it makes some truly astonishing things possible. What I didn't realise is tha GeoDjango uses Geo Queryset methods to perform spatial operations with spatial databases such as PostGIS. An example was shown of an imported dataset of all of the states in the US which had been mapped as polygons. Justin demonstrated in the admin how it's possible to change the co-ordinates of the polygon through a draggable interface and save it. All kinds of queries can be made to find where objects intersect or whether they're contained within a boundary etc. Brilliant work.

To close day one, Cal Henderson gave an brilliant presentation on "Why he hates Django". It was mostly a massive piss-take but with some serious points thrown in, and really covered a lot of areas in Django that are no-doubt going to be addressed at some point in the future. 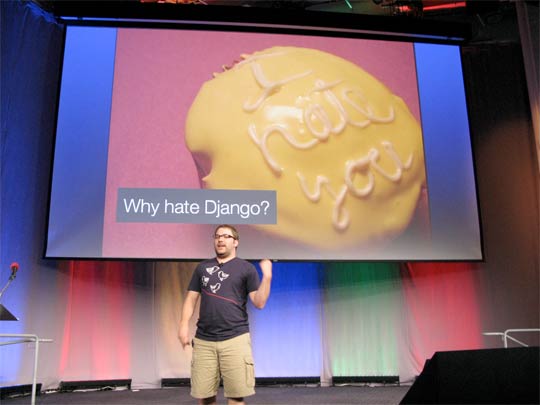 I saw Mark Ramm talk about what Django could learn from Zope. I thought there were some interesting points made. The main one though is just the general point that the Django community shouldn't become blinkered and should look to benefit where possible from other work within the Python Web development community.

Malcolm's talk on Code and patch design was good - he cut right to the point on what's needed to make a good contribution and pretty much everything he said was common sense.

The Django Success stories was quite interesting as it really focussed on practical things that people had learnt using Django in their work and I think as a general point some of the most interesting stuff learned from attending DjangoCon came from hearing about what people are building with Django. Definitely should be more of that at future DjangoCons.

Lastly after a live eposide of TWiD, Adrian and Jacob hosted a session to close DjangoCon to cover what's going to be happening in the future. After detailing their recommendations they opened up to the audience to make their "I want a Pony" requests. Utimately Django's future is looking really good and I came away from the whole event pleased about the direction it's all going in and looking forward to be able to contribute back to the project in whatever way possible.

Well done to Rob for all his efforts in putting together the conference. Google also did an amazing job of hosting it and I'm looking forward to the next one. 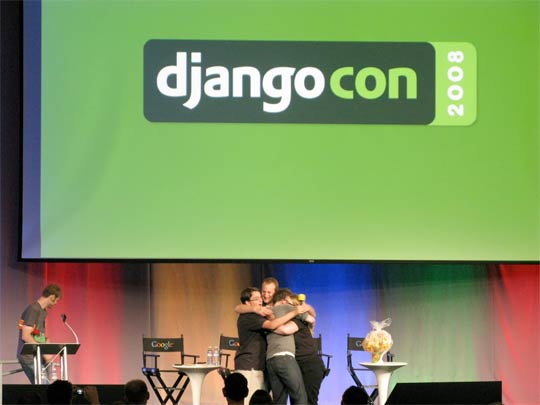 With DjangoCon over I took a couple of days to visit San Francisco where I caught up with Ben and Cyril for a great meal at Spork after spending a bit of time in the Haight seeing the Grateful Dead house and buying a load of awesome Deadhead stickers etc!

I also enjoyed an epic walk from the centre of the city out to the Golden Gate bridge prior to meeting up with some Yahoo's for Fondue at San Mateo. I made sure to take the chance to sample several of the city's finest coffee shops including checking out the Japanese Syphon bar at the Blue Bottle. San Francisco is awesome and I hope that I can visit again soon!

Linux: Changing UIDs and GIDs for a user