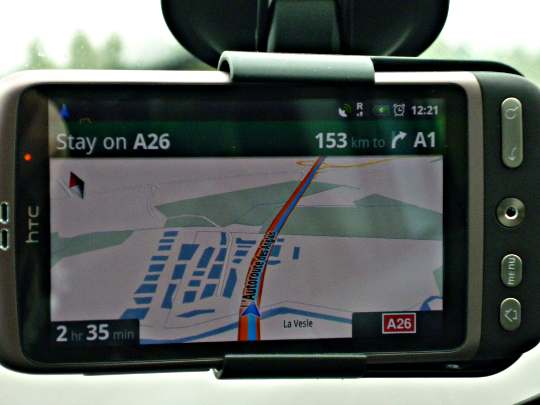 When on holiday recently I made extensive use of the Google Navigation app with my HTC Desire to provide satnav for our journey across France.

Before we travelled I'd been using Navigation in the UK and was really quite impressed with it. The directions were accurate and I'd found it worked really well. Out of the box it found the places we wanted to drive to easily and if we went the wrong way, re-routing was quickly calculated. The detail provided for junctions and roundabouts are clear and timely as you get several prompts before and during the manoeuvre.

Google Navigation fetches the route upfront when you tell it the location you want to head to, it doesn't currently provide maps to download in advance. The route is cached so it doesn't need any data as long as you stay on the route. In the UK as my contract includes unlimited data, it's not a problem to request a new destination on the fly or have Navigation re-calculate a new route if you miss a turn.

The interesting thing about trying to use this abroad was I didn't want to end up with a massive data bill when roaming. So this required a bit of planning. When setting out on a route, where I had Wi-fi available, I'd use that to pre-fetch the route so I didn't need to use mobile data to get the route. I bought a weeks worth of data for roaming via Text message (It was Â£5 for 50mb for a week). Then I only used the mobile internet when I absolutely needed to. Turning mobile internet on and off can be achieved by pressing and holding down the power button and then selecting it from the menu that appears.

In France the instructions were as accurate as the instructions in the UK and for the odd occasion where we'd got lost it was very handy to be able to get our location and find our way back to the place we were staying at. It would be nice to have a French accent to the audible instructions when in France, but the english voice was was good enough to know what was happening.

What could be better

The main downsides were it would be great to be able to download maps in advance to avoid the faffing with turning data on an off. This would also avoid the reliance on a signal to get directions. If there's no data connection available you have to drive until you have one.

Another issue is that currently there's no way to route a journey with a specific via point. This would have been useful in the case where we knew there were roadworks making a particular route unusable. The way to get around this was to drive off the chosen route and then have the app re-route us when we knew it would have to choose the route we wanted to take.

Lastly and probably the most frustrating issue with Navigation was that I found that the app seemed to crash if the phone got hot from being charged up. If the phone wasn't being charged or the weather was colder it seemed a lot more stable. Time will tell if this issue will be resolved with Froyo update.

As Navigation is free, it really is quite stunning how well it works. If you've not yet tried it out and you have an android phone, I'd highly recommend it.
Share: Twitter Facebook
Tags: Google Maps SatNav

Brewing with a French Press

Recovering Deleted Photos from an SD card with PhotoRec